Gene is the Director of Construction Projects at Thaddeus Stevens College of Technology.  Gene has 30 plus years of involvement in Public Safety and Community Services. He has an abundant background in helping the youth, and has a passion for helping them gain life skills.  His goal is to provide education that enriches their knowledge and skills. In addition, emphasize how the values of hard work and determination can impact their future and those around them. He wants them to see, they too have endless possibilities for a career in the Public Safety and Community Service fields.

Paul has lived most of his life in Lancaster, Pennsylvania. He has been married for 18 years and has a 16-year-old daughter. In addition to being on the board of Camp Cadet, Paul was a camper 36 years ago! Paul appreciates the opportunity to help kids get the same valuable experience that he did as a camper at Camp cadet.

Blain is a retired Pennsylvania State Police Trooper and is currently employed as a security guard with Lancaster General Health. Blain’s passion for Camp Cadet began in the early 90’s when he became a camp counselor and later becoming the assistant camp director and then camp director. Blain continues his passion for camp in his retirement as a board member assisting wherever there is a need.

Frank H Ember Jr has been a police officer since September 1993, and is currently a Detective with Northwest Regional Police, Elizabethtown, Lancaster County, Pa.

Frank believes the connections made by the cadets and the Law Enforcement counselors and community through the week-long Camp experience each year, provide a lifetime of appreciation by both the cadets and Law Enforcement Professionals. Frank has had countless past cadets over his 22 years on the board with praise and admiration about the program both as young cadets and later Adults.

Nick Paulukow
Board Member
ONE 2 ONE 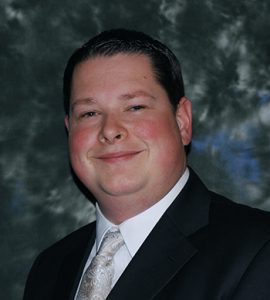 John is a Lancaster County native currently employed as a Human Resources Business Partner with Members 1st Federal Credit Union. John has a passion for community service and working with youth. In addition to Camp Cadet he is active with his son’s Boy Scout Troop 142 in Lititz as an Assistant Scout Master, is the Vice President of the Manheim Township Ambulance Association, and serves as a board member for Lancaster SHRM where he is a committee member on the workforce readiness committee.